In place of today's usual Words on Wednesday, I thought I'd share the first in a series of baby shower posts!

One of my fellow Marine Corps wives is pregnant with her first child, a little girl.  I threw a baby shower for her this past weekend, and wanted to share a few details with you this week.  The official theme was bath time, but it was rather loose.  (I'd say the official "theme" was the colors pink, purple. and white!)

I was busy hosting, which to me meant being in constant motion, so the very sweet Elena took a bunch of pictures on the mom-to-be's camera.

I have decided to break up the baby shower into several posts over the next week or so.  The first post in the baby shower installment is my super awesome, super cute diaper cake!  (Totally tooting my own horn.  I know.) 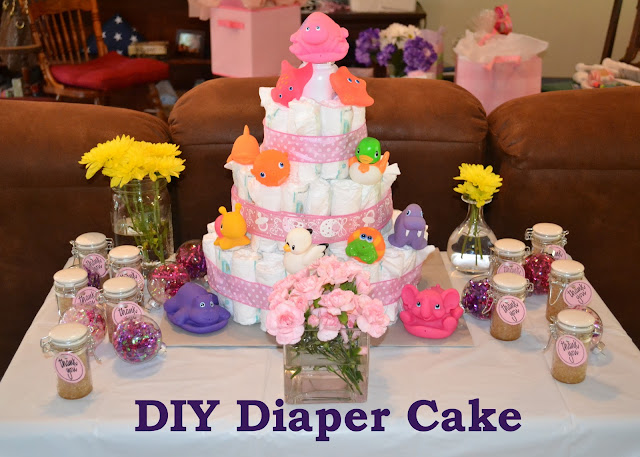 I thought that this project was going to be much more difficult than it turned out to be.  It is actually quite simple and only took me an episode and a half of Gossip Girl.

Here's what you'll need to make a diaper cake:

double-sided tape
small and large rubber bands (I bought one bag of asst. rubber bands)
a sturdy base (I used some cardboard from one of the diaper boxes)
about 60 diapers (I used newborn sized diapers)
various ribbons
items to decorate the cake
large bottle of baby shampoo or wash
smaller bottle of baby powder
(depending on how large you want your diaper cake, you may want to select different sized bottles of baby product)

Begin by rolling the diapers individually, from back to front.  Secure them with a rubber band then form a ring around your large bottle of shampoo.  Secure the ring with a large rubber band. 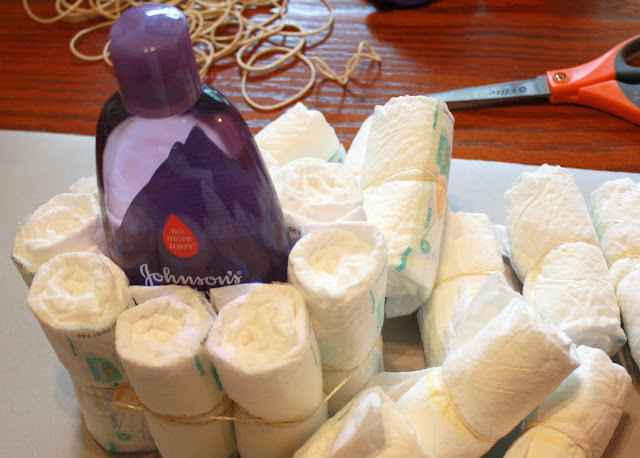 Form two more rings of diapers around the first, securing each with a large rubber band. 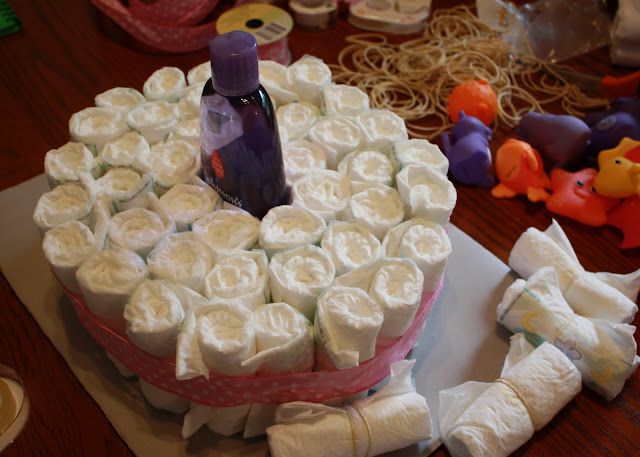 Build a second tier on top of this one, except with only two layers of diapers.  Unfortunately, I got so into my diaper cake creating that I forgot to take pictures of the second and third tiers.  Check out this site for instructions with pictures for each step.

Place the second bottle of baby product on top of the first and keep it in place using a bit of double-sided tape.  Create one more tier of diapers (one layer deep) around this bottle.

You don't want the rubber bands showing in the final product, so use the tape to secure ribbon around the tiers.  I found my ribbons at the Dollar Tree.

Decorate the cake according to your theme.  The smaller bath toys were purchased at Target and the larger toys (turtle, hippo, & elephant) were found at Walmart. 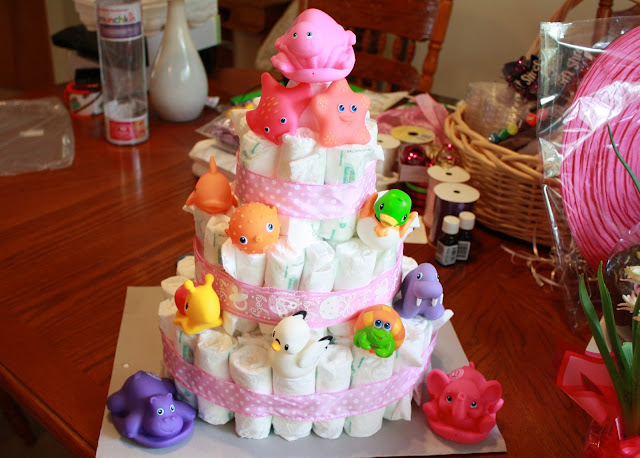 And there you have it!  One diaper cake for an awesome mom-to-be.
Posted by Mo at 15:59